The Truth About Cystitis

Well here we are a few weeks after meez diagnosis with Sterile Cystitis to tell ya’ da truth as we have found it. We told you then what we were told by da VET. We told you dat this was very common ‘specially among cats who eat Blue Buffalo foods and dat it was caused from too much protein in da diet. Yep we wrote it as we was told, but we also included dat mommy wuld be duin’ a lot of little research herself. Just didn’t seem right dat an obligate carnivore kuld be eatin’ too much protein?. 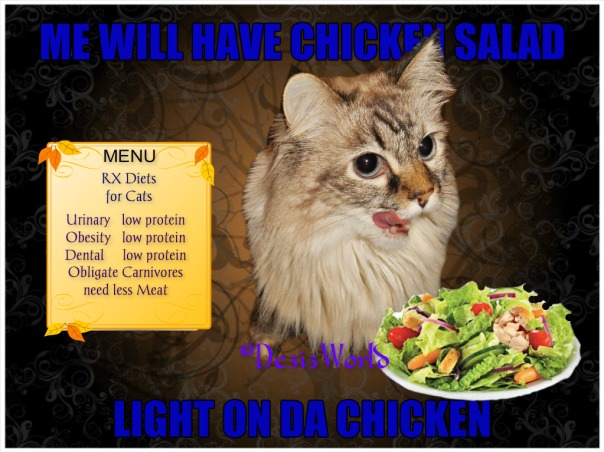 Meez sure glad you don’t believe everything your told mommy. Me just wuldn’t like eatin’ salads and cereals.

No sweety you sure wouldn’t have, nor could you survive on those. Quite frankly I’m sick and tired of hearing from vets and pet food companies that cats, who everybody knows are “obligate carnivores,” need less protein. And I’m tired of pet food companies including so many ingredients in their foods that cats don’t need, can’t process and that could literally kill them.

Me thinks we oughtta ‘splain what dat means. Wikipedia says Obligate means by necessity. And Carnivore means flesh (meat) eating animal. In plain human English dat means Cats MUST eat meat. So how is it dat me kuld eat too much meat? 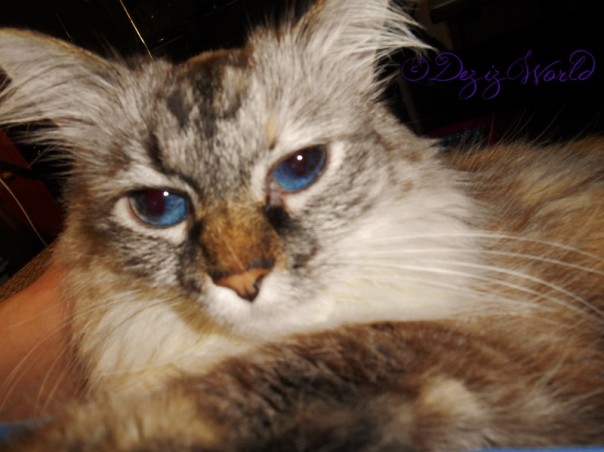 Pull up a chair, get’cha’ a cup of joe, tea, or whatever you dwink and let mommy tell ya’ how it is.

That’s just exactly what I wanted to know baby, and one of the many reasons I like to research everything myself. And the biggest thing I found in my research was not the amount of protein in cat foods but the amount of carbohydrates. High carbs can cause inflammation in the bladder and thus bring on a bout of Cystitis. Your grain free diet was full of them as are many cat foods regardless of quality or price, grain free or not. Pet parents almost need to become scientists to understand the labels on their pets’ food. The photo on the package is rarely indicative of the actual ingredients in the bag or can of that food in your cabinet. You can read the Truth About Pet Food for more information about what’s in your pets’ food and the FDA regulations, etc. Again, there are many other places to gather this information and you need to research and decide for yourself what is fact and what is fiction. 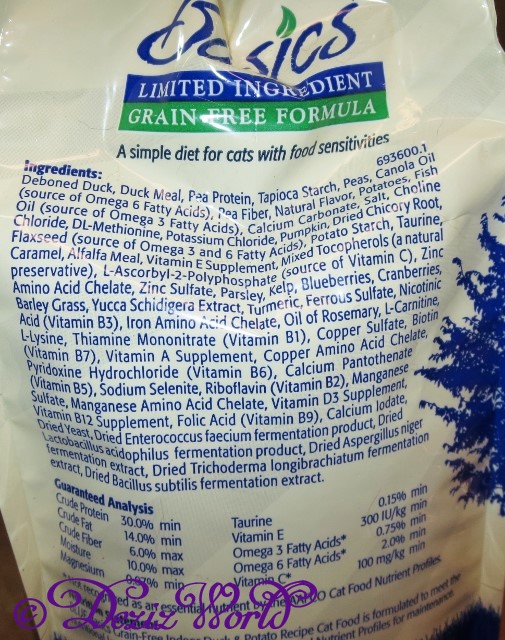 The ingredient list of the food Dezi was eating.

Ingredients on the Hills bag the vet recommended below:

Sterile Cystitis is a condition that can affect both cats and kittens, male and female alike. The first occasion of Cystitis often occurs in young cats between the ages of 2 and 6 years old. The name implies an inflammation of the bladder of unknown origin with no infection present. In other words, they don’t really know what causes it. And altho’ there’s no infection, the cat is most likely in pain.

Vets make assumptions and all too often give bad or outdated information. We were told Dezi was eating too much protein and that the prescription diets for this condition (like the one for Lexi’s CKD) had a lower protein percentage and would clear up her symptoms. And that a lifetime switch would keep it from coming back.

Another assumption is that stress is a leading factor in causing Cystitis. For cats, stress could be anything. In general (not always) cats don’t like change. They are creatures of habit. Anything out of the ordinary can stress a cat. Boredom can cause stress as much as a thunderstorm or a house full of guests.

You can find a list of “typical” symptoms all over the internet, but I will list them here as well.

2. Straining in the litter box

3. Crying out while in the litter box

4. Blood in the urine

5. Urinating outside the litter box

These are the main symptoms that alert to a problem in your cat or kitten’s urinary tract. BUT Dezi had none of these symptoms. Altho’ Dezi went to the litter box 4-5 times a day, she never strained or cried out and there was never blood in her urine. She wasn’t drinking excessively, altho’ she did like to play in the water fountain, thus justifying her 1-2 extra trips a day. When she did use the piddle pads instead of the box, it was always because the box had been used and not yet scooped. If she poops before urinating, she won’t go in the same box. The only time she will do both in the box at the same time is when she urinates first. Yes I know she’s got a few strange quirks, but that’s my baby girl and I love her no matter what.

So what were Dezi’s symptoms you ask? What caused me to think a urinalysis would be a good idea as it’s not really part of the complete exam the vet was offering? Well a lot of you know I lost Lucky to a urethral blockage, and Dezi was mimicking some of the behaviors that he had. So we are going to list them as well because feline health is so important and they can hide an illness so well.

1. Excessive licking/cleaning of the genitals immediately after urinating.

2. Appearance of spraying without actually spraying. Example: Tail straight up, cat backed up to wall/chair/leg/etc. and then tail shimmies/shakes with no urine produced. (This is something both Lucky and Dezi did when they got excited so I never thought it was a symptom of anything other than joy. They would both sometimes chatter at the same time. However, Dezi no longer does this regardless of her excitement level so this is a symptom of a problem). 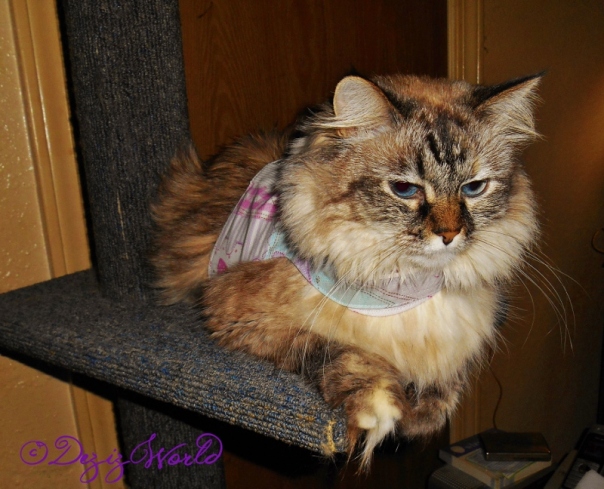 With Sterile Cystitis there is also the possibility that crystals have formed in the urine/bladder. There are 2 main forms of crystals called Struvite and Calcium Oxylate. Since this didn’t happen in Dezi’s case we won’t go into them here, but you can read more about them at uvma.org.

With a condition that has no real explanation as to it’s cause, how do you go about treating it? Something you should be aware of is the fact that cats can have this condition and have it clear up on its’ own in a week or two with no treatment whatsoever. Since there’s no infection, antibiotics are not helpful and should be avoided so your cat doesn’t build up a tolerance. If you’ve been alerted that there’s a problem then no doubt your cat is in pain. Since the bladder is most likely inflamed, an anti-inflammatory may be prescribed for 1-3 days as well as a pain medication by your vet. If you suspect anything is wrong with your cat’s health, please see a vet immediately.

In Dezi’s case, there was no infection and no formation of crystals so after a few days of an anti-inflammatory, pain meds and an increase in hydration, she appeared to be doing better. We also began a food change as I personally didn’t like her eating the BB kibble due to the ingredients. (We’ll cover all of this in another post) We have urine pH testers on their way so that we can test her urine pH and be sure, but she is leaving larger deposits in the litter box fewer times a day now and no longer “faux spraying”. She can also leave the litter box without plopping down immediately to clean her genitals.

As you all know, I’m not a fan of prescription diets from any manufacturer since they are all based on the studies done by Hill’s Pet. Instead of doing their own research they rely on old studies performed by a food manufacturer more than a decade ago. Now having said that, you must make the decision for your own cats. I only ask that you do some research before you believe everything you’re told. Vets are an invaluable resource, but even they don’t know everything, and can’t keep up with all the new information and studies. And you know your cat better than anyone. Okay, off my soap box now and back to the known facts.

Cats don’t drink like other species so a wet diet is preferred to aid in keeping them well hydrated. Water fountains are also a good choice because cats like fresh running water. (please clean your pets’ water bowl or fountain regularly.) A batch of cooled nip tea, cooled chicken broth or a few ice cubes in your pets drinking water may also entice your cat to drink more.

We’ll be discussing Dezi’s food change and supplements in a future post as well as the stress relieving supplements and changes we are making in our everyday lives so that we can lessen the possibility of a recurrence of Sterile Cystitis or any other FLUTD’s. 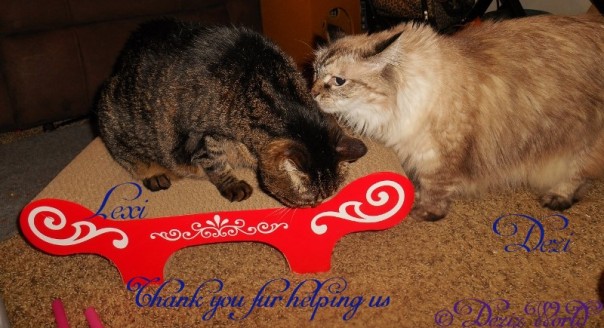 Fank you all fur helpin’ us. Our Chewy box arrived today wiff our noms, litter and pH testers.

Well mommy ifin anypawdy was wonderin’ where me got meez wordiness from, they be wonderin’ no more. MOL We know this is a long posty, but it’s full of good infurmation and in human English so it shuld be easy fur everypawdy to read. This post is in no way a comprehensive look at Sterile Cystitis, but is the truth as we have found it.

Luv and Hugs and Kitty Kisses

The latest news on WordPress.com and the WordPress community.

Tails of a Persian Tabby

Possibly the Only WordPress Blog Hosted by Mice

Samson, Bo and me in Savannah

Letting your cats experience the world one bag at a time.

About cats and man

or what is too many cats?

When Wine Goes In Wisdom Comes Out!

The trick to being a cat and boating

LIFE OF A CAT

Princess on a mission

Life as a wandering black cat

Saving the world one cat at a time!

The Baddest Cat You'll Ever Love

seshatgoddesintraining
~Plucking Of My Heartstrings~

The happenings in our multi cat house hold

I love all kinds of art and hope you do, too!

The Adventures of Noodle

The Life of a Rescued Stray

Musings of a Manx

Infuse Creativity In All You Do

Welcome to the Deck!

life in the not-so-fast lane

random thoughts from my cat

The Life of Service Cats